Long before the technology has taken over our lives, long before the journey of social self-alienation was imposed by our modern society, there was a certain joy in ‘emptiness’. A pleasure in having time to contemplate the world, to be one with nature and to spend time on our self-development. The Greeks called this period Contemplatio (contemplate). Plato believed that through contemplation the soul would ascend to knowledge of the Form of the Good or other divine forms. Contemplatio is also the fourth step of the traditional Christian practice, Lectio Divina. From the third century on, Benedictine monks used scripture to commune with their God, but unlike the Classic Greeks, they mixed their prayers with Christian morals as self-oppression, fear of the divine, and auto-flagellation.

In a parallel journey, the search for contemplation has led the artist Gustavo Chams to a pathway of self-discovery and an immersion to his own simple yet melancholic childhood. This experience has led to the creation of Contemplatio, a series of 5 risography images that explore his early contact with melancholy and nature and how it was soon overshadowed by the fast rise of technology.

Using risographic printing techniques, this series comprises five large-format prints designed to emerge the viewer into its circular motion. The dot-matrix concept overlays dots of pastel pink on depictions of trees and plants filtered through machines, with the objective of halting time itself. The observer is drawn to explore this unsettling juxtaposition creating a shuddering arrest of conflicts, but one that is also oddly involving.

The physiological depth and spiritual questioning of this series compels us to contemplate our own mortality. The classic Greeks saw this alternative mindset as their pathway to a more complete existence. In the same way, Gustavo’s work can be seen as questioning, where nostalgia becomes the key to understanding the meaning of our short lives on Earth. With this series, the observer gets to strip away the veneer of crass modern consumerism and reflect upon a simpler, purer way of being. 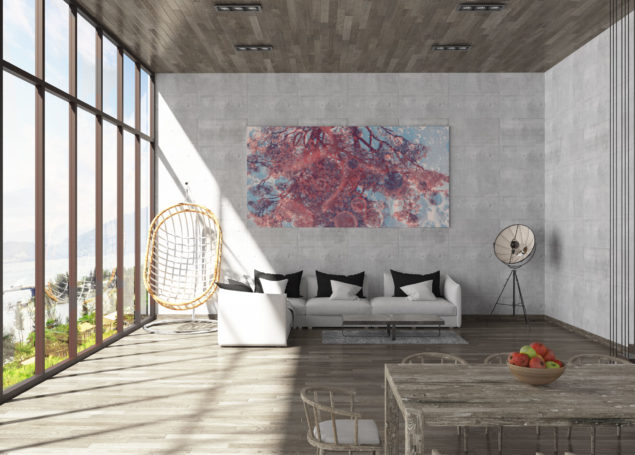